The following pieces are studies from a body of work currently underway exploring systems of structure, logic and rationality. Originating from considerations of the grid and its entailing connotations and history in visual art, these pieces are employing various systems of structure and offsetting them with images made by chance. The resulting pieces explore juxtapositions of chance and order, indeterminacy and determinacy.

These pieces are from a wider body of work taking existing visual stimuli and applying indeterminate procedures to its means of creation. These particular pieces have taken the humble Jigsaw and manipulated its process by subjecting it to means of randomly generated numbers and sequences. 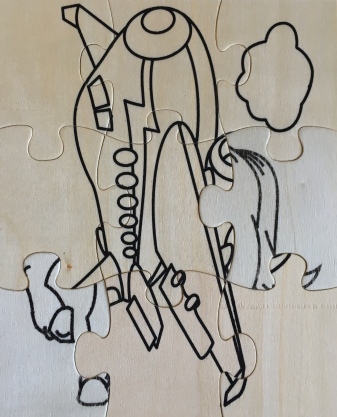 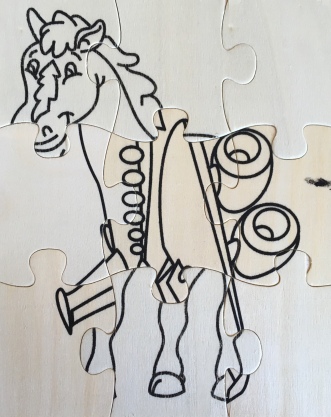 These pieces are from a wider body of work taking existing visual stimuli and applying indeterminate procedures to its means of creation. These particular pieces have taken the humble Tile Puzzle and manipulated its process by subjecting it to means of randomly generated numbers and sequences.

These pieces are from a wider body of work taking existing visual stimuli and applying indeterminate procedures to its means of creation. These particular pieces have taken the humble dot-to-dot and manipulated its process by subjecting it to means of randomly  generated numbers and sequences. 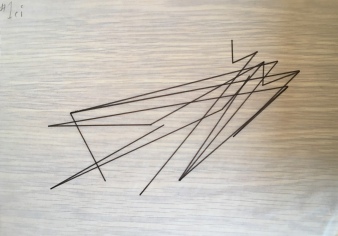 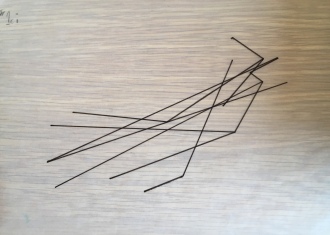 These pieces are from a wider body of work taking existing visual stimuli and applying indeterminate procedures to its means of creation. These particular pieces have taken the humble ‘Painting by Numbers’ and manipulated its process by subjecting it to means of randomly  generated numbers and sequences.

Image 1: as per factory instructions (before manipulation)

Image 2: as per my instructions (after manipulation)

The following pieces are taken from a series exploring the concept of edited and amended improvisation. In the production and mixing of Jazz tracks it was common practice to cut and paste elements from previous session tapes in order to mix the final ‘perfect’ solo that would appear on the final album. These pieces borrow the same concepts and subject earlier paintings to the same procedures. 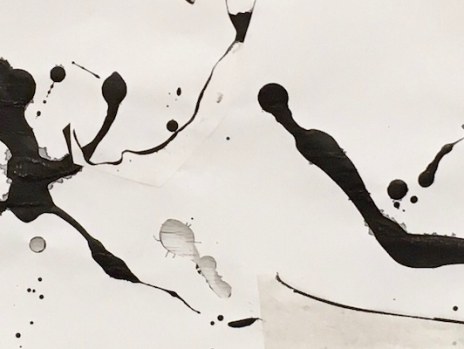 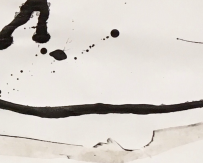 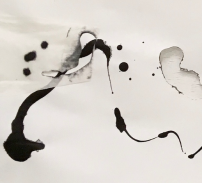 The following pieces are from a series exploring the concept of improvising upon a motif – a common practice in Jazz music. Musicians such as Miles Davis regularly used source material in the guise of existing material which he would then use as a motif on which to improvise upon. These pieces are taken from a series exploring this concept in a visual sense, using Jackson Pollocks Number 14, 1951, and Picasso’s Guernica, 1937 as source material from which to draw motifs to improvise upon. 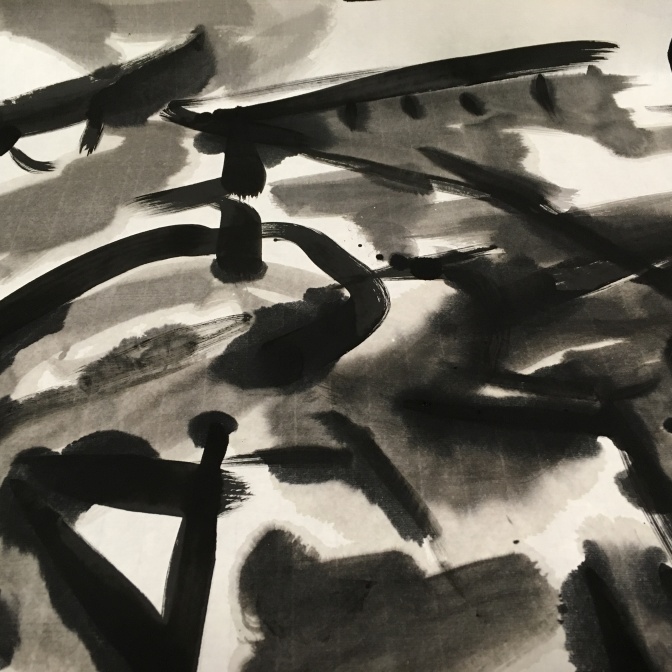 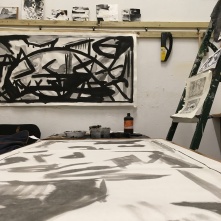 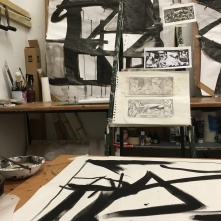 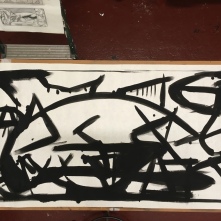 The following pieces are a selection from a recent body of work I am developing in response to a series of tonal still life observations I completed in November. In the vein of artists such as Franz Kline and more recently Jeanatte Barnes, the pieces represent an exploration of tone from observation. They also combine a number of recent concerns and interests surrounding Chinese Calligraphy and western abstraction. Although very much in its infancy, I am encouraged by these early studies and the potential they hold,  both aesthetically and conceptually. 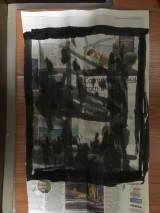 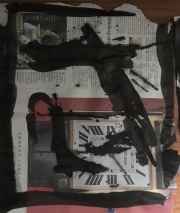 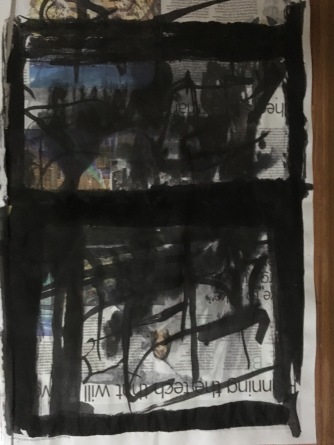 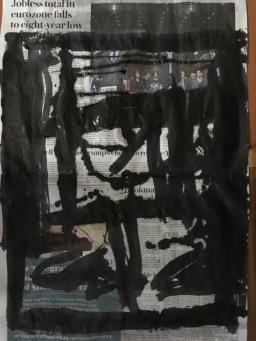 The following still life studies were completed whilst on my most recent visit to China. The studies are an exploration of tone through the medium of pen and ink and represent a return to observation. They were undertaken in response to a number of concerns and reflections I had from a series of classes I had thought at the time. The pieces have also provided a starting point and acted as foundations for a body of work I have started since. 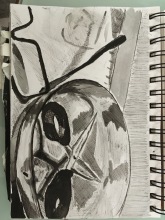 Still Life with bowl and glasses

Still Life with glass and bowl

Here are some images of the current studies I have been working on in the studio. The images partner my recent posts entitled ‘studio diary 12/10’ and ‘studio diary 18/10’. The pieces represent the first work from my new studio and are still very much in the experimental stages. I hope to develop a clearer notion as to where these pieces will lead and the themes they entail over the coming weeks. Please check back again for further updates.

These pieces (below) represent the most recent work and the main focus of my energies at the present time. Through their technique, the pieces are an exploration into the later ‘pour style’ of painting Jackson Pollock developed in the final years of his life. By enhancing the flow of the paint and applying it through a turkey baster or pipette, great movement and rhythm of mark can be captured, whilst also allowing for a greater degree of control and direction over the medium and mark. 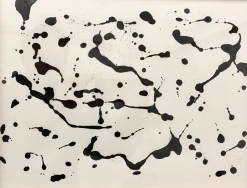 The following pieces are more directed toward an experimental approach, focussing specifically on layering and texture. Through a collaged approach, the pieces explore how a ‘flow enhanced’ paint reacts with varying textures and layers of its support. The pieces also act as a context in which to apply the earlier mentioned ‘pour technique’. 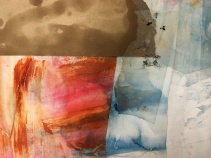 Please see the following links for more detailed information regarding the development of this body of work.

Drawing is essentially in its rawest form – mark making. The following drawings were produced in collaboration with nature. By attaching drawing implements to various objects (in this instance found outside) such as trees, visual drawings can be made by recording the movement of the object. The following drawings were created by harnessing the kinetic energy of the wind through the movement of trees, and plastic sheeting. The resulting drawing is a visual documentation of an objects kinetic energy. 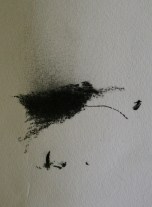 created by plastic sheeting trapped under the lid of a salt/grit box, charcoal on paper – Dovey Junction Train Station 2013′ 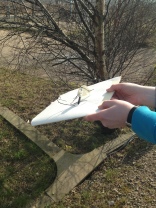 Below are some further studies from the initial chance derived compositions based from the original coffee shop / sports hall source. 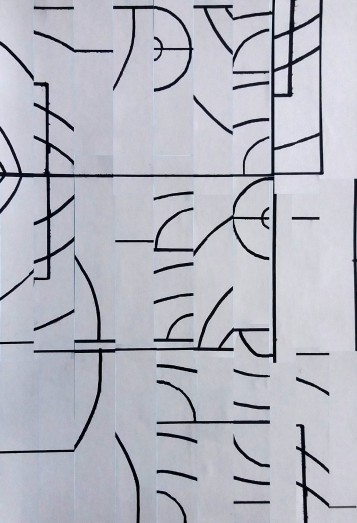 Kazimir Malevich ‘Suprematism of the Spirit’ 1919 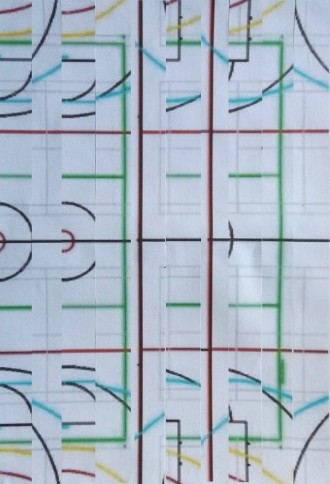 Below are a few studies I have recently made originating from inspiration derived from a recent visit to a coffee shop. The pieces have been created by the sole use of indeterminate process – employing an on-line random number generator, and dice. Deriving from John Cage’s chance procedures, a number generator and dice were used at every stage where a decision was to be made regarding the construction and composition of the piece – therefore, replacing the artists judgement of taste and preference with chance.

The source of my inspiration lay on the decoration adorning the upstairs walls of the coffee shop. Strips of wood, some carrying blocks and fragments of different colours had been seemingly randomly arranged on the walls to furnish the upstairs. The arrangement immediately reminded me of school gym floors with the overlapping of coloured tape simultaneously mapping out the dimensions of basketball and badminton courts.

On first viewing the wall takes on the resemblance of a monumental Malevich, with its simplified structural forms seemingly splattered across the canvas. Or even an exploded Mondrian painting. I immediately began to ponder over however, the potential that a de-constructed gym floor could offer for a re-imagining into an art work, and especially the potential of the role chance procedures could offer for deciding the arrangement of the composition. 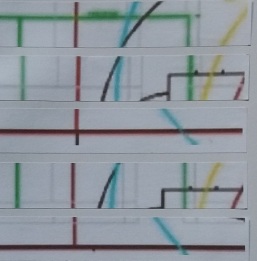 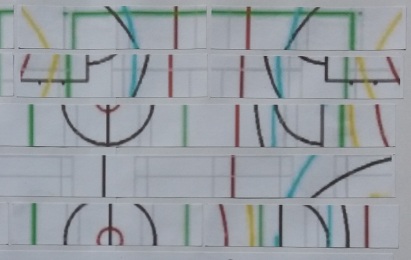 So far, unable to get my hands on an old ripped up sports hall; I decided to settle for second best and re-create the parameters of the piece through printed outlines of sports hall markings. 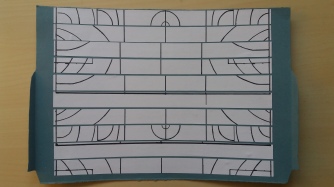