Having stumbled once again upon Jackson Pollock’s late ‘pour’ paintings whilst preparing an Art History lecture in which I will discuss his later – evolved style, I was immediately struck once again with their immediacy, rawness and fluidity of mark. Lee Krasner’s eloquent, profound summary; ‘Painting with the immediacy of drawing…’ resonated around my mind like the tolling of a bell. The refined nature of these pieces, with their distillation of mark and form, invoke in me the aesthetic sensibility of Chinese calligraphy – the economic use of mark so refined yet remarkably sophisticated. On reflecting upon these pieces I was reminded again of the penultimate room at the Royal Academy’s Abstract Expressionism exhibition, focusing on pieces on paper. Lacking the scale and grandeur of some of the movements large canvases, these pieces spoke with the same authority, their succinct nature projecting a sophistication far beyond their size. 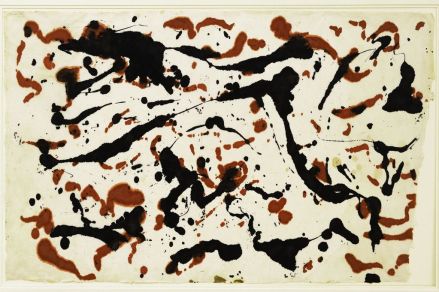 Having bought some acrylic ‘flow enhancer’ I embarked on my own studies, striving for a greater fluidity of mark and form in my work.

Some initial observations and reflections:

About to ‘bin’ the sheet of flooded rice paper in order to generate room for further studies (a pitfall of a small studio), a corner ripped off in my hand as i began to try to move it, seemingly due to the sheer saturation of the paper. Upon ‘dropping’ the torn piece onto the sheet I was immediately struck by the resulting succinct image before my eyes. 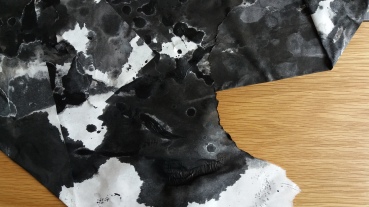 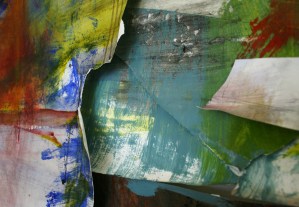 The saturated blackness of the piece was now interspersed with tonal variations of grey and white, creating both depth and an interest of form. Always being intuitive towards these things, and one to embrace the ‘happy-accident’ I began to further ‘destroy’ the piece by tearing and folding areas and laying them atop others (In order to create we must first destroy) – resulting in a richly varied tonal piece, mimicking the sail of a ship in it’s unorthodox shape. Further reflection upon these took me back to a series of pieces I completed a number of years ago for the first of my MA exhibitions. The pieces were reminiscent of one another not only in the formal sense: their shape, and deeply textured and tonal surfaces, but also in their processes of production; ‘tearing’, ‘ripping’, ‘folding’ and ‘bending’, creating the heavily layered surfaces.

Upon braving the studio a couple of days later I decided to try and extend on the ‘pour’ technique I was experimenting with days earlier. Although I was content and excited with the ‘happy accident’ which led to some interesting results on my last visit, I was still eager to develop and explore further an application of paint more akin to a pour or flow. On this occasion I decided to use a Hahnemuhle paper as a plane to work on – its thicker construction and textured surface providing a more hard-wearing support for the thinned, fluid paint to penetrate. 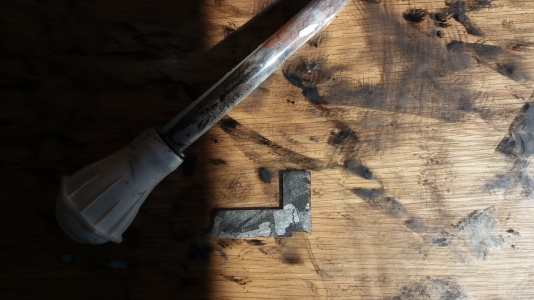 After a longer period to reflect on these pieces, however, especially after they have dried and set, I am most content and excited with the results. They demonstrate a fluidity of rhythm and movement unable to obtain through a more direct application, and the minimalist, sparseness of composition enables the marks to dance and move across the piece. On close inspection of this style of painting, one can really see how Pollock, through a deeply considered and thoughtful approach, and after careful reflection – was evolving and refining his renowned ‘drip’, for a more considered, carefully distilled ‘pour’.

Having embarked on these pieces in a monochromatic palette, I thought back to Pollock’s pour paintings, and one study in particular, ‘Untitled’, 1951 (above) has lodged itself in my mind from my first viewing a number of years ago. The introduction of burnt sienna contrasts the black beautifully and generates a greater sense of depth and rhythm to the piece, whilst still retaining its refined aesthetic. In this spirit i decided to add a second colour, yellow ochre.

After a number of experiments applying the ochre to both wet and dry layers of black, generating mixed results, I persevered to apply the ochre in a less ordered manor. Thinking back on the pieces i created from days earlier, particularly the ‘happy accident’ study, i decided to incorporate these techniques and processes to the same piece. 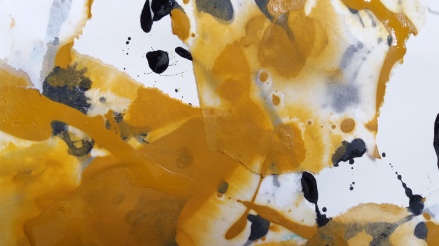 Proceeding to apply a yellow ochre to the rice paper, i allowed it bleed and run, saturating the paper with varying tones as it began to dry.  Tearing and ripping the  paper and then applying it over areas of black on an earlier ‘Hahnemuhle’ study, I began to create collaged constructions that seemed to pulse with movement and energy. The over-layed rice paper created veils that at times allow the underlying black to shine through, whilst others subduing it to the back of the composition. These veils allow the piece to seemingly morph in and out-of-focus, whilst the white of the original support acts as a stage for the black to dance and move across, generating great dynamics and rhythm to the piece.

A breakthrough at last?… Always be intuitive to the ‘happy accident’.