Painting offers a way of working through an idea. Especially when working through a monochromatic palette without the distraction of colour. Even mindless painting without a clear agenda or goal insight will often generate something poignant or worthy of further exploration. 11th January 2017

I have long since admired Drawing’s immediate nature, it is ‘fundamental in translating and analysing the world’ (1), it is the first port of call in visualising expression or articulation, and as my long suffering students would vouch, is a most valuable tool for problem solving and ideas exploration. And yet, here in lies the contradiction: I experience far greater success in ‘working through ideas’, and discovering new possibilities when working through paint.

I find the process of picking up a paint brush and painting ‘something’, a more genuine activity than drawing when approached in the same manor. To approach drawing in an improvised, non-intentional manor, more often than not results in a ‘rehearsed’ practice, a recycling of old material and forms – marks, shapes and tonal values. Painting however, when approached through an improvised manor as an activity in itself, offers a far greater breadth of possibilities. Perhaps the very materiality of the medium, inherently fluid based, offers a greater breadth of manipulation, and in-turn, thorough exploration that yields a far greater range of potential sources of future exploration.

The initial pieces existed of an exploration of mark, exploring density of mark and line – some densely and others very sparsely populated.

Early pieces were originally undertaken on glass with a mono-type like transfer being taken – consisting mainly of disappointing results due to the very fast drying nature of the ink.

In response to this, I began applying mark, and working directly on to small pieces of textured Hahnemuhle paper. The results were far more positive, with the pieces harnessing clearer mark with a greater variety of tone. I was initially reluctant to work directly on paper. I felt working on glass would encourage a greater fluidity, and freedom to the way I worked, encouraging a less precious approach about the pieces. However, with my hand forced to work directly on paper for the most part, (with the exception of later pieces combing the two methods) I found an equal freedom and fluidity to the way I worked. 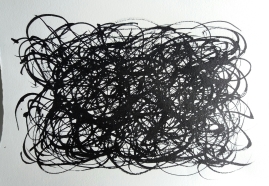 These experimentation’s led to a use of ‘mark’ more akin to that of calligraphy found in China and Japan, and indeed eastern thought as a whole. This modified approach found me replicating an aesthetic of flicks, fluidity, and subtlety of mark that I have long admired and been drawn towards since my first encounter with Chinese Calligraphy some years ago.

As the experiments grew I began to develop and extend the language I used by combining washes of blue ink over the earlier drying layers of the lyrical black, producing interesting results, particularity in the bleeding of the black into the oceans of blue. I found this new approach also offered new possibilities of working into the washes and the wetted black. With the sharp end of a small brush I was able to drag the black ink to create a deeper variety of mark and depth to the pieces.