At a recent meeting with my supervisor, whilst ‘pinning down’ the terms reproduction and interpretation in the context of equivalents between alternative art forms (i.e visual & audible), I was introduced to the concept of ‘databending’. Databending derives from the practice of circuit-bending, where spontaneous and unpredictable sounds are produced by short-circuiting various electronic objects such as effects pedals and keyboards. Databending is used in a similar way by using software to intentionally disrupt information contained within a file. 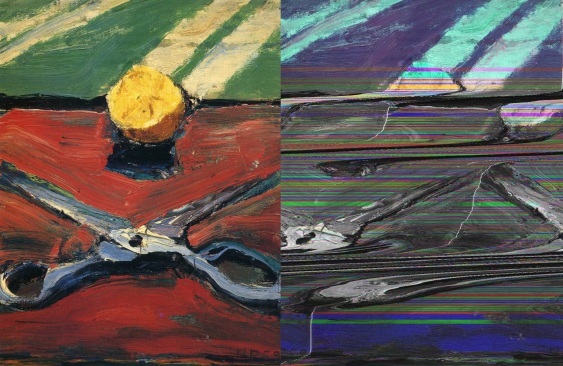 Despite there being many different techniques involved in databending all creating very different outcomes, the most simple to use, and the technique I have used here is called the ‘WordPadEffect’. By saving an image as a BMP file, opening in wordpad, and then simply saving again, the file information is disrupted and thus creates a new image -beautifully indeterminate by its very nature.

For me the attraction to the concept lies in the indeterminate nature of the processes. One is unable to realistically predict the outcome of the process, and although as in the wordpadeffect, there is scope for physically disrupting the information by copying, pasting and deleting sections of code, the resulting image is still unpredictable and essentially undetermined by our hand.

During his career, John Cage used a number of different indeterminate techniques in order to remove the ‘ego’ from the creative act. Most commonly used in his musical compositions, Cage famously used the I Ching – the ancient book of Chinese changes, and a simple dice – used predominantly in his Ryoanji series of drawings. As advancements in technology enabled however, he even commissioned a computer programme called ‘Rover’ that would randomly produce a series of numbers at certain times to decide the curation of his exhibition Rolywhollyover: a circus.  Much like in Cage’s time, advancements in technology today offer an almost endless number of possibilities to be employed by our means. The contemporary sound artist Bartholomaus Traubeck often employs contemporary digital technology as a process in his work, none more so than in his piece ‘Schrodinger’s Tag Cloud’. Schrodinger’s Tag Coud is a  website consisting solely of ‘tags’ that users have had to enter to view the webpage.

In the ‘Cageian’ spirit, I manipulated one of his Ryoanji drawings by applying the same method of production to the databending process. The resulting image looked like this:

As mentioned above, the technique of databending can be as simple as the wordpadeffect, or as complex and intricate as ones computing brain allows. The possibilities the technique offers are almost endless however, with the concept not limited to re-imaging image files, but able to be applied to sound and text files also. By opening the image file that has been subjected to the wordpadeffect in music editing software such as Audacity, you will be presented with an audible interpretation of your image – all be it a glitchy one bordering on white noise. In the same way that one is able to produce audible interpretations of images, if one is in possession of the right software the databending process will also enable visual interpretations of audible files – thus making a visual equivalent of an audible file.

Check back shortly for some sound – image experiments.