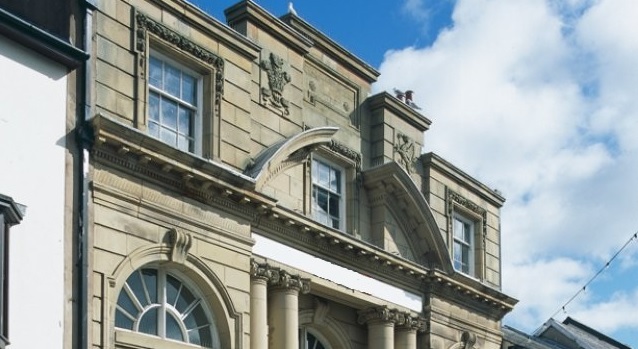 There is an old iron drain pipe on a building on the high street in Aberystwyth. Whenever there has been any substantial rain fall, (which is quite often in Aber) and the ferocity of the rain has ceased, or at least eased, the powers of gravity takes over and the remaining water in the guttering proceeds to drip down the drainpipe towards the ground.

The down pipe in question is a very old, squared, cast iron pipe. Other than being a very interesting visual object due to the textured, impasto layers of rusting black paint flaking and chipping away, it possess certain acoustical properties also. The pipe follows the vertical façade of the building and instead of flowing straight into a drain or sewer, it opens straight onto the pavement. At the point where the down pipe reaches the pavement an opening has been made on the front plane of the squared pipe allowing the water to flow out. Just beneath the opening, a bottom has been welded on to enclose the bottom of the pipe forcing the water to flow out of the front of the pipe and through the troughs moulded into the concrete pavement, rather than through bottom of the pipe as with usual down pipes.

When rainfall has eased and the flow of water travelling down the pipe is less fierce, the water drips onto the enclosed bottom plate of the pipe creating a sharp hollow chime before draining out onto the pavement. Much like Marina Acoustics: the chimes reverberate at perfect pitch, striking a note that could be mapped onto a musical scale. Although reverberated due to the enclosed nature of the pipe, the chimes can be heard from quite some distance away towards the bottom of the street, -making an otherwise forgettable, damp walk home into a memorable acoustical treat.

Finding a contemporary PVC drain pipe which is as aesthetically pleasing, both visually and audibly as Aberystwyth’s iron example could prove quite a challenge.

One cant help but think things aren’t what they used to be.